Damn! I did not know the dress code was blue tie and male. I am at Dell’s big summit with Michael Dell in Copenhagen. Here we learn how to say “shut up bitch” and that women don’t belong in tech. (original post in danish)

Deep buzzing voices from suits and blue ties run through the halls. I am wondering where they are hiding the women. All I see is smiling PR girls handing out name tags. But then I see them. A handful of female Dell employees hidden in suits and blue scarfs.

Founder and CEO Michael Dell is in town to talk to 800 partners, customers and Dell employees (not that I am any of that, but I am however invited). Registration is at 11 am and the Michael Dell keynote is at 1 pm. But Dell has hung up colorful ballons so I am having a ball waiting.

Finally just before 1 pm the doors open and people enter the big conference room. Loud music and a well produced commercial on big screen provides the feeling of a rock concert (without the beers).

At 1.02 pm the danish VP Henrik Thomsen enters the stage to introduce Michael Dell (and to warn people not to get to close to the blue polyester ties; he recognizes the fire hazard).

Michael Dell is the man who founded the computer company since 1987 know as Dell. He is a big star on the international tech scene and number 41 on Forbes list of billionairs. I take a seat in the first row and hope it will rub off.

Michael Dell arrives and I note that he somehow avoided the polyester tie (must be the advantage of owning the room).

Mr. Dell talks about IT and cloud and mentions that Dell does a lot of work with Twitter and Facebook and eBay. He also mentions a few Danish customers such as Grundfos and Copenhagen Airport. The program says Mr. Dell  will be talking for 40 minutes. He talks for 20 minutes. I am not sure excatly about what, but it is often like that with CEOs and he looks like a nice guy so we all applaud with great enthusiasm when he leaves the stage.

But then it starts to get bizarre. The moderator of the day is introduced. Mads Christensen. I slowly realize; THAT Mads Christensen. A media personality known (among many other charming traits) for his very conservative and critical approach to women in the work place.

So here I am at Dell’s huge and very professional summit with founder Michael Dell, top people from Microsoft and Intel, impressive power points, expensive commercials, matching polyester ties and all that jazz, and then the – by Dell chosen – moderator starts to rejoice the lack of women in the room. “The IT business is one of the last frontiers that manages to keep women out. The quota of women to men in your business is sound and healthy” he says. “What are you actually doing here?” he adds to the few women who are actually present in the room.

Dell’s moderator continues talking about his two Rolex watches and he then presents the next speaker from Intel. After the break Mads Christensen shares with us his whole “show” about the bitchy women who want to steal the power in politics, boards and the home. “Science” he calls it and mentions that all the great inventions come from men. “We can thank women for the rolling pin,” he adds.  And then the moderator of the day finishes of by asking all (men) in the room to promise him that they will go home and say, “shut up bitch!”.

I turn pale. Not because I am personally offended. I know Mads Christensen and what he stands for and I don’t usually pay much attention to what he says. I am pale because I am in a state of chock realizing that a large professional company as Dell will conciously hire someone with the well known agenda Mads Christensen has.

What happend in that meeting where that decision was made?

PR 1: We need a moderator too. Someone that can present the speakers and entertain a bit.

PR 2: How about that Mads Christensen guy? He is pretty funny right? He always talks about how women are pissed off all the time and that they should stay away from the male jobs.

PR 1: That’s a great idea. Totally in line with the Dell values. Maybe he can even do something funny about the IT business still being so wonderfully free of women? Then it will be spot on!

I have a really hard time seeing how the communication team in such a big organization can justify booking a speaker/moderator that always talks with the agenda that women should shut up and men should learn to tell them that.

I talk to a female Dell employee and she assures me that this is not how it is working for Dell.  I did not think so, and that is why I am so extremely baffled that a tightly run company like Dell would approve the booking of a speaker that to an audience of 800 (mainly men) with 100% certainty will talk about how women should be kept down. The IT business is already lacking women, so I should not think that any company is in need of being associated with that kind of message.

I try and fail in getting an opportunity to ask Michael Dell if he thinks it is wonderful that “Keep the IT business free from women as long as you can” was said on stage right after he left.

I do get to talk to Dell’s danish CEO Nicolai Moresco who of course tells me that Dell is very happy about all the female employees and that they even have a lot of initiatives and networks.  He eventually says he can follow my perspective, but he explains that he was only chosen to entertain and warm up the crowd and he thinks that he succeeded doing that. “To stay within code of conduct I don’t want to comment on what you just said. But you did a good job” was he finishing line to the moderator of the day.

We continue to talk about Dell’s many social media initiatives and I ask why @Delllytter (Dell listens) did not listen today when Twitter went red hot over the tweets that came out from the Dell summit.

“They will react,” Moresco promised me. And they did. At 5.26 pm Dell wrote. “@christianevejlo we are sorry if some were offended. Dell works for women in corporate life. Read more here.” (Twitter did not seem to think that was quite enough response).

And the sad thing was that talking computers and Dell strategy with CEO Nicolai Moresco was actually really interesting. But alas- that did not become the story today.

For a more in deepth analysis on why this case is so problematic go to this follow up post. 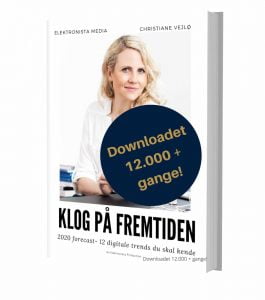