A translation of a previously posted article in danish.

For an international conference in Copenhagen, computer giant Dell hired a moderator who not only was the emcee for the day’s program, but also encouraged the participants to continue to keep the world of IT free from women.

I live tweeted during the summit, and described my take on the events in this blog post  “Dresscode: Blue Tie and Male”. The story quickly took off on social media, and later the conventional media. As a response to the comments on the original post, and as a summary, I will explain why I think this case was so problematic.

Dell had invited 800 people to a conference where Michael Dell, the Dell founder, would be giving a keynote. As a moderator, Dell had chosen well-known controversial personality Mads Christensen.

Christensen started off by saying ”there are hardly any girls here today, and I’m happy to see that”, and followed up by encouraging the ”IT boys” in the room: ”Hiss it through your teeth – shut up, bitch!” Along the way, Mads Christensen kept the sharp comments about women in IT coming, as well as female politicians, and the problem with strong women in general. Of the 800 people in the room, only 5% were female.

Two important questions have arisen from all this:

How could it be that the communications strategy of a large, professional American company like Dell would include choosing an emcee who’s known for controversial comments about gender and race?

What does it mean when a large IT company sends the signal that it’s okay to make extremely sexist comments – in a professional context?

Mads Christensen was hired and presented as the emcee who would weave the whole professional event together.

That made him Dell’s representative for the whole event, and not an independent entertainer to fill a time slot with a quick appearance.

The chosen emcee is especially known for his conservative and provocative comments about the male/female relationship, and speaks often about a culture of passivity caused by the female domination of society. It’s what he always speaks about, it’s his brand. He is NOT a comedian, but a well-known and controversial debater and speaker, and a man with strong views in the gender debate. His speech doesn’t consist of set-ups and punchlines, more like a provocative rant of the views, he is publicly known for having. He refers to it as ”research”.

Mads Christensen has previously caused a media storm for controversial statements, such as – the children of Utøya should have defended themselves against Breivik, and ”some n*****s look like monkeys”.

The risk of problematic statements that cross people’s boundaries is a part of the brand. As emcee Christensen was on Dell’s payrolls for the day. Brands who interact with each other have a habit of rubbing off on each other as well. Did Dell research which brand they booked? Or  – was Dell well aware of the risk of being associated with such a controversial brand?

The Achilles Heel of the IT Branch

For the duration of the Dell summit, Mads Christensen continues to deliver sharp commentary about the role women have in society, specifically women in the IT branch. The comments I find most problematic here are: ”there are hardly any girls here today, and I’m happy to see that – why are any of you here in the first place?”, ”The gender quota is still pretty strong and healthy in your branch”, ”All good inventions came from men, women we can thank for the rolling pin”, “The IT business is one of the last frontiers that manages to keep women out” and “IT boys, hiss it through your teeth – Shut up, bitch!”.

IT already has problems attracting women to the workforce. Motivating more young women to apply for technical educations and getting more women to seek jobs in the industry is a priority. It has been suggested that there’s a lack of role models, and that the image is of an exclusive man’s world which chooses to ignore the fact that women are half the population and thereby also potential colleagues, partners, and customers. There has been a debate about the phenomenon booth babes (BBC), and the idealization of brogrammers –  frat-boy type programmers with a penchant for beer and naked ladies. Tech company Sqoot lost all of their sponsors and had to cancel an event by offering ”friendly female staff” at the bar. 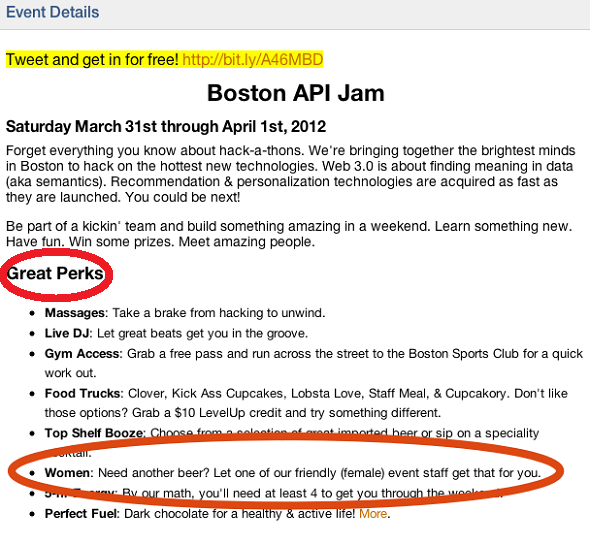 Dell itself has already been sharply criticised for patronizing female computer buyers by offering recipes and dieting tips i the Della universe, for a compensation case involving female Dell employees who were systematically being economically discriminated against, and for having a HR department described ”One of the toughest old-boy networks”.

This is, in other words, a touchy subject for IT and for Dell especially. And now when some parts of Dell is trying to position Dell with initiatives for promoting women in IT, is it not even more problematic to propogate Mads Christensen’s agenda (that women are taking over and men should shut them up) at an event where only 5% of the attendees are women?

Is it generally a good idea to entertain with provocative attacks against any minority, and that at a large corporate event (replace ”women” with ”immigrants”, ”homosexuals”, ”blacks” etc.)? Especially when the American part of the organization is in town?

“But it was only a joke”

But then again, isn’t it just me and all the others who found the episode to be inappropriate who don’t have a sense of humor? The whole room was laughing! 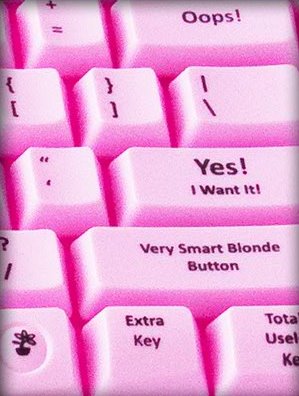 Of course it’s funny when a man makes a case for a woman to be clobbered unconscious so he can easily hump her, and for keeping women out of IT. Isn’t it? There should be leeway for that shouldn’t there? If that doesn’t make you laugh, then you’re just stuck up and humorless aren’t you? Really?

You certainly can’t blame anyone for thinking that Dell legitimized the laughter, and thought the tone was appropriate, when they themselves had chosen that very moderator, and the danish CEO afterwards finished by saying ”you did a good job”. Yet, nonetheless, a great many women and men found the comments problematic – especially in the context of the brand at hand.

But what does it mean when ”shut up, bitch!” is legitimized at a large corporate event with the follow up excuse that ”It was just a joke”? What do the 800 attendees take home with them, and learn is okay in the context of their workplace? What is then considered legitimate during the lunch break, in a meeting room with 12 men and 1 woman, or at the annual office Christmas party? Is it at all an option for a woman to voice her displeasure with offensive, gender specific ”jokes”, if she is one of few female employees at a company, and it’s her boss or male colleague who tells the jokes?

As one of the comments on my original post said ”…a lot of women have to live with comments that are much worse on many construction sites…dry your eyes and get over it”. Do we have to think it’s funny, just because a similar rhetoric occurs in other branches where women are also the minority?

Should the IT branch be a free zone for ”shut up bitch”  (see Dorte Tofts post about Dell, in Danish), or shouldn’t we just get on with it and move into the future, where women in tech are not synonymous with pink computers, friendly female staff at the bar or a minority we make fun of?

At some point, women’s role as competent employees in IT and as affluent customers for the tech products will hopefully no longer be something we have to think about, talk about, highlight or make fun of.

14. May 2012 Dell HQ apologizes for “insensitive and inappropriate remarks” against women at Copenhagen summit

We need to talk- Copenhagenfollies

No Tweets Available or bad configuration...